The major challenge to the economy: housing production and supply 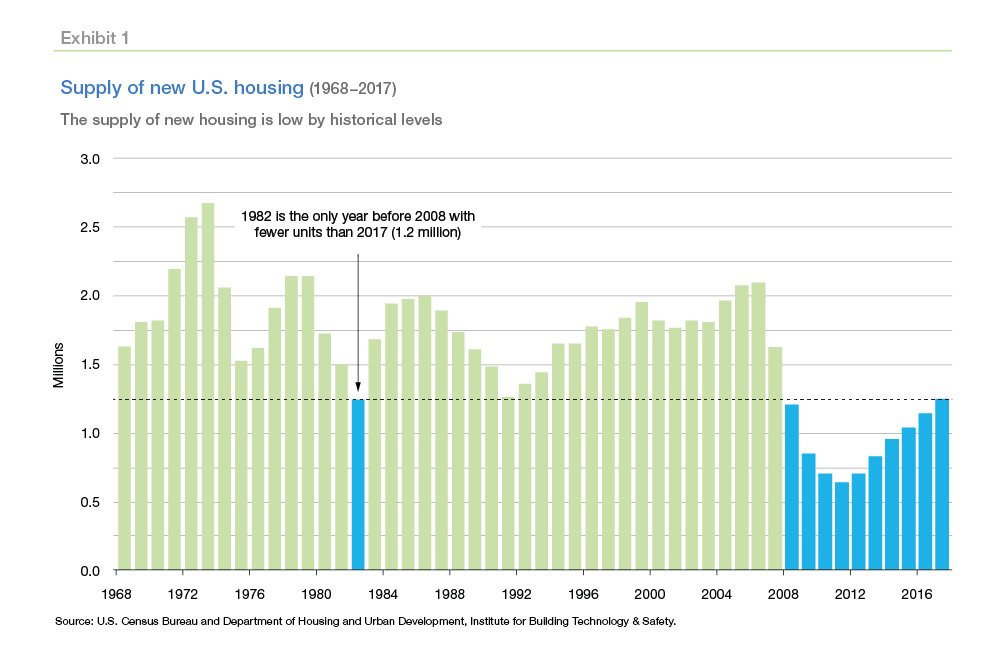 FreddieMac, one of the government-sponsored enterprises that makes the 30-year mortgage possible, released a report last week that provides startling evidence that home building is under-producing housing in startling fashion.  The exhibit above from the report demonstrates the problem.

In the last 40 years, since 1968, with the past 10 years excluded, in only one year did the home building industry produce fewer homes than 2017: 1982.  And for the last 10 years, the industry has consistently under produced housing.

As a result, housing is dramatically less affordable and our economy is suffering as well.  If a recession is on the horizon, having a large segment of the economy sitting on the sidelines may be a significant part of the cause.

Here are some of the reasons for this problem:

At a National Association of Home Builders meeting not long after President Obama was elected, NAHB staff discussed four EPA regulations that, if any one of them were adopted, they said would cripple the industry and drive up the cost of housing.  All four of them were passed.  As a result, the cost of compliance with regulation now adds 25 percent to the cost of a new home according to a study conducted by NAHB in 2016.  According to that study, the cost of compliance with regulations increased 29 percent between 2011 and 2016.

Earlier this week the EPA announced the revision of one of those regulations, the Waters of the U.S. definition, or WOTUS.  Your HBA was at the table.

Much more work is needed to address these barrier to the industry, and your Home Builders Association is working hard on the problem.