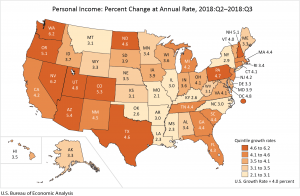 Earnings. Earnings increased 4.0 percent in the third quarter of 2018, after increasing 3.0 percent in the second quarter and was the leading contributor to personal income growth in most states, including the six fastest growing states—Nevada, Washington, Arizona, Colorado, New Hampshire, and Oregon. Earnings increased in 20 of the 24 industries for which BEA prepares quarterly estimates (table 4).

For the nation, professional, scientific, and technical services; state and local government; and healthcare and social assistance were the industries contributing most to overall growth in personal income (chart 1). 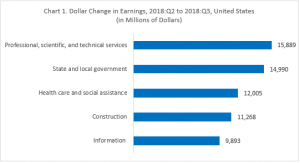 Property income. Property Income increased 4.0 percent for the nation in the third quarter of 2018, after increasing 3.9 percent in the second quarter. Growth rates ranged from 5.2 percent in Washington to 2.6 percent in Oklahoma.

The state of South Carolina showed relatively no change in average personal income growth for the third quarter of 2011 and ranked 37th in growth in the United States, according to estimates released by the U.S. Bureau of Economic Analysis on Monday. However, South Carolina exceeded the national average growth in seven of 24 business sectors that were analyzed. The largest growth was seen in health care and social assistance, where the state realized a 1.6% increase compared with the previous quarter. The national average is 1.4%. The state’s increase represents $158 million above second quarter earnings. Read the entire article from GSA Business.