GREENVILLE, S.C. – Habitat for Humanity of Greenville County has kicked off construction for the 330th Habitat home built in the Upstate.
Community members joined together on Wednesday, June 24 in the Abigail Springs Subdivision for a wall raising ceremony, accompanied by the homeowners. The wall raising is one of the most important and iconic moments for a Habitat Build project, said Monroe Free, Habitat Greenville’s President and CEO.
This ceremony marks the 330th Habitat home built in Greenville County since 1985. The 330th home also comes during the 30th anniversary of Habitat for Humanity in Greenville, making today’s celebration a golden one for Habitat.
Habitat Greenville also recognized Christ Church Episcopal, Fluor Corporation and Furman University as longtime community partners throughout the organization’s 30-year history, along with Habitat founders and Representative Garry Smith of Simpsonville. Smith recently authored legislation to grant tax exemption on construction materials for nonprofits who build homes for low-income citizens.
About Habitat for Humanity of Greenville County:
Through affordable home construction, Habitat for Humanity of Greenville strives to eliminate poverty housing and the social and economic problems it causes.  It is the 2015 winner of the Nonprofit Excellence Award given by the SC Association of Nonprofit Organizations (SCANPO). Habitat Greenville, chartered in 1985, celebrates its 30th anniversary and construction of its 330thhome this year.  Learn more at www.habitatgreenville.org. 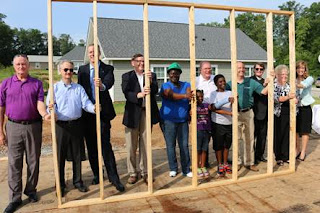