A modest increase in interest rates and home prices kept housing affordability at a 10-year low in the third quarter of 2018, according to the NAHB/Wells Fargo Housing Opportunity Index (HOI) released last month.

In all, 56.4% of new and existing homes sold between the beginning of July and end of September were affordable to families earning the U.S. median income of $71,900. This is down from the 57.1% of homes sold in the second quarter that were affordable to median-income earners and the lowest reading since mid-2008.

“Ongoing job and economic growth provide a solid backdrop for housing demand amid recent declines in affordability,” said NAHB Chief Economist Robert Dietz. “However, housing affordability will need to stabilize to keep forward momentum from diminishing as we move into the new year.”

The index for Greater Greenville rose to 71.7 in the third quarter from 69.3 in the second quarter, but fell from 74.7 in the same quarter last year.  House prices fell slightly while income remained the same.  Greater Greenville ranks as the 96th most affordable housing market in the country.

The Rest of the Nation

For the second straight quarter, Syracuse, N.Y., remained as the nation’s most affordable major housing market. There, 88.2% of all new and existing homes sold in the third quarter were affordable to families earning the area’s median income of $74,100. Meanwhile, Kokomo, Ind. was rated the nation’s most affordable smaller market, with 93.2% of homes sold in the third quarter being affordable to families earning the median income of $64,100.

San Francisco, for the fourth straight quarter, was the nation’s least affordable major market. There, just 6.4% of the homes sold in the third quarter of 2018 were affordable to families earning the area’s median income of $116,400.

Other major metros at the bottom of the affordability chart were located in California. In descending order, they included Los Angeles,-Long Beach-Glendale; Anaheim-Santa Ana-Irvine; San Jose-Sunnyvale-Santa Clara; and San Diego-Carlsbad.

All five least affordable small housing markets were also in the Golden State. At the very bottom of the affordability chart was Santa Cruz-Watsonville, where 6.5% of all new and existing homes sold were affordable to families earning the area’s median income of $81,400. 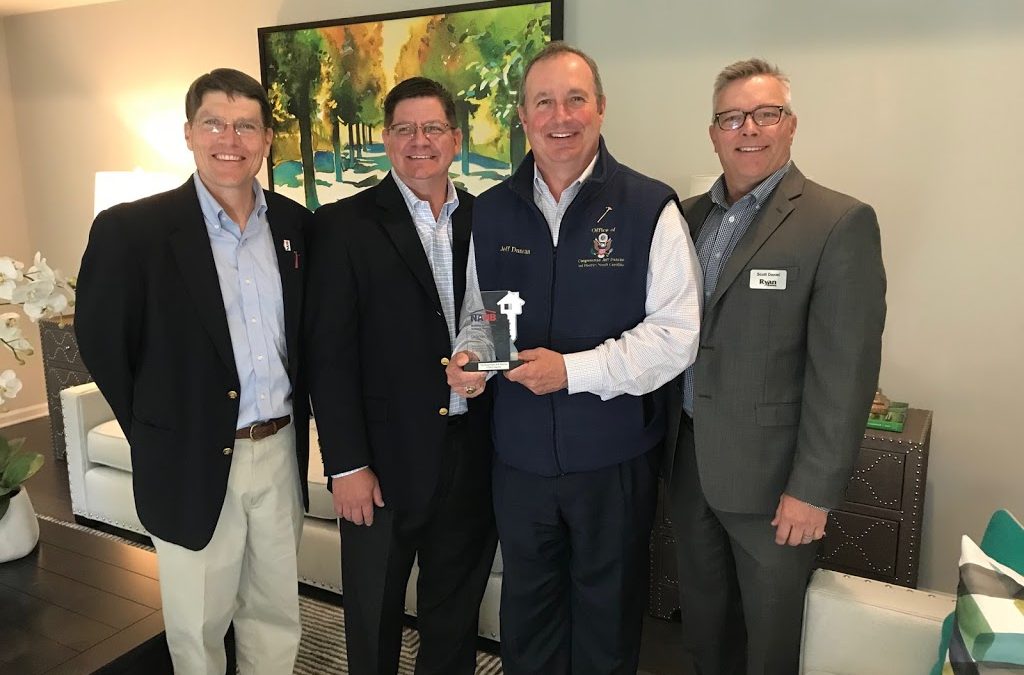 Your HBA leaders and PAC donors met this week with Congressman Jeff Duncan.

During the meeting our members discussed with Duncan the need to resume negotiations with Canada over the lumber tariff, the need for a long-term renewal of the National Flood Insurance Program, the labor shortage and the need to expand the guest-worker program and support training in the building trades, and a long-term solution to the the mortgage-finance system.

During the meeting, HBA of South Carolina President Rick Quinn, APB, presented Congressman Duncan with the NAHB Defender of Housing Award. Thank you Ryan Homes for hosting the meeting.

With a September 30 deadline looming, Congress has approved a broad package that will keep the government funded until December 8, provide roughly $15 billion in disaster relief from Hurricane Harvey, and raise the debt ceiling, which sets a limit on the amount of money the federal government can borrow.

The government funding package also means that the National Flood Insurance Program (NFIP), which was set to expire on September 30, will be extended until December 8.

The National Association of Home Builders continues to work with Congress to achieve a long-term reauthorization of the NFIP that will keep the program fiscally sound and let builders provide safe and affordable housing.

The prospect of tax reform is becoming a reality, and I expect legislative action to begin in earnest this fall. Given the importance of tax reform to the NAHB membership, we want to make certain we accurately represent your concerns in this debate.

Please participate in an online discussion with your NAHB Leadership on what tax reform means to our industry. Bring your questions and concerns: We will cover business taxes, including the deduction for business interest, homeownership incentives such as the mortgage interest deduction, multifamily tax issues including the Low Income Housing Tax Credit, and provisions affecting remodelers.

We will hold three “Tax Reform and the Housing Industry” web briefings on Monday, Sept. 18. The three 60-minute briefings each cover the same information, so you only need to attend one session. The briefings will take place at 9:30 a.m., 12:30 p.m. and 3:30 p.m, ET.

You must pre-register for this member-only event. Please make certain you are logged into nahb.org as this is members only content.

If you are unable to participate in the live webcasts, the recordings and staff contacts for more information will be posted to nahb.org after the sessions conclude.

This is an important time for the housing industry. Tax reform will shape the course of our livelihoods for the next several decades. We must get it right. Join me at one of the briefings on Sept. 18.