Hurricane Harvey directed the bulk of its punch on Texas, and Irma is headed our way.  However, Approved Professional Home Builders in the Upstate may not be free of the impacts of these hurricanes.  Hurricane Katrina should be a guide to the potential impacts that Harvey may have in store for the Upstate in the coming weeks.

Fuel prices and availability
The first impact is already being felt, and may continue for days or weeks: gasoline availability and price.  Half of the nation’s oil refineries are located in Texas and Louisiana, and they are all closed.  As a result of the lack of flow, the Colonial Pipeline, the means by which gasoline is shipped to the Southeast from the Gulf Coast, has been closed also. This is the source of half of our state’s fuel.  Gasoline prices have already jumped, and shortages may follow.

Building materials shortages
Following Katrina, building materials, particularly lumber and plywood, were in short supply for several months as these materials were diverted to devastated areas following Katrina.  Approved Professional Home Builders can expect the same with Harvey and Irma.  Texas and Florida get some of their lumber from the same suppliers as South Carolina.  These suppliers are in Louisiana, Alabama, and Georgia.

If you are not using an escalation clause in your contract with your customers, you should consider using one.  Your attorney can help you add one to your contract.  Your Home Builders Association can provide you with a sample.  Simply email eo@HBAofGreenville.com.

Labor shortages
Another issue Approved Professional Home Builders experienced following Katrina was labor shortages as subcontractors traveled to hurricane-effected areas to help and in search of bigger pay days.  No matter the reason, some of your labor may head to Texas and Florida to work on clean up and repair efforts there.

In a meeting yesterday with Federal Reserve officials, labor availability was front and center as the number one concern of business people in all industries.  Labor availability is reaching crisis levels, and Harvey could be a catastrophe that pushes the labor problem for construction in the Upstate to a crisis situation.

Approved Professional Home Builders should plan for these contingencies, and prepare for the customers for possible delays in their projects. 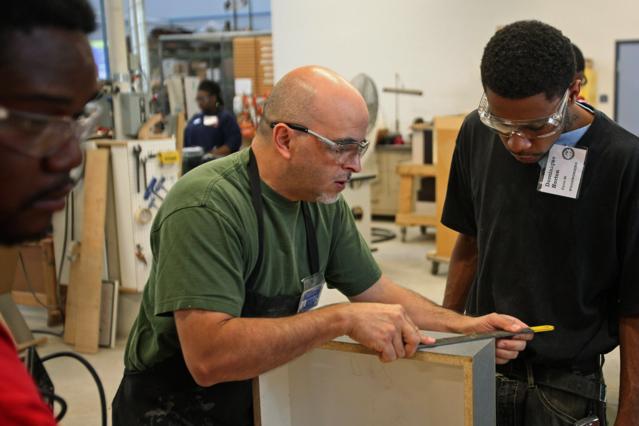 The National Association of Home Builders and a group of 18 other trade associations representing business leaders and millions of employers across the nation today submitted written testimony refuting the myth that immigration hurts American workers and the economy during a Senate Judiciary Committee hearing examining this topic.

Employment projects for 2012-2022 by the U.S. Bureau of Labor Statistics show that the construction sector is expected to grow by more than 20%, nearly double the overall national average.

“Indeed, some sectors have seen rising labor shortages, presenting significant industry challenges,” the group’s written testimony stated. “For example, the number of open construction sector jobs as of December 2014 (147,000) stands post-recession highs, and the job open rate exceeds that prior to the housing boom. Lesser-skilled immigrants help to fill labor shortages in these industries, creating jobs for Americans and helping those industries grow.”

As the debate on Capitol Hill continues, your Home Builders Association is urging lawmakers to support comprehensive immigration reform that will:

This will be an opportunity for HBA members, who are interested in hiring trained employees, to learn about the programs and curriculum at Greenville Tech and meet the faculty and staff.  You also will have the opportunity to meet students, your future employees.  Lunch will be served.

Please RSVP to the HBA Office by calling 864-254-0133, email info@hbaofgreenville.com, or register online by clicking here.

Your HBA of Greenville has been reporting on this for months now. Take a look at the most recent article from GSA Business.