There are a number of reasons why lumber prices have jumped, including a rail car shortage in Canada, but the primary factor is the 21% effective tariff rate placed on Canadian softwood lumber. The ongoing concerns over trade wars represent a macroeconomic risk to the gains resulting from the recent tax legislation, and lumber is a prime example.

Nonetheless, builder confidence remains strong, despite total housing starts falling 3.7% in April. Though multifamily starts declined 11% last month, that market is up 10% year-to-date, outperforming our forecast. And single-family starts are 8% above their year-to-date totals from a year ago. However, recent data show a gain in average new-home size, which is an early indicator of weakness in the entry-level market due to rising input costs.

A new consumer spending analysis from NAHB highlights another reason why home building helps drive a healthy economy: In their first year of ownership, new home buyers spend about $10,601 on appliances, furnishings and home improvement projects — 2.6 times as much as other home owners in a typical year.

“While construction jobs are the most obvious impact of new homes on the economy, it’s important to realize that it doesn’t stop there,” said NAHB Chairman Granger MacDonald, a home builder and developer in Kerrville, Texas.

“It’s the architects, the heating technicians, the lumber dealers. And it’s the mom-and-pop owners at the local furniture or appliance store who are helping these buyers make their house a home,” he said.

During the first two years after closing on the house, a typical buyer of a newly built single-family home tends to spend on average $4,500 more than a similar non-moving home owner.

A previous NAHB study based on 2004-2007 data collected during the housing boom showed somewhat higher spending by home owners overall. But the tendency of buyers to outspend non-moving owners on appliances, furnishings and home improvements was similar.

In the aggregate, most of the demand for appliances, furnishings and remodeling projects in a given year is generated by non-moving home owners, because they outnumber home buyers by such a wide margin.

But new owners’ impact is noticeable — and vital, MacDonald said. “The health of housing — and new home buying — is key to the overall state of our economy.”

The HPI is calculated using home sales price information from mortgages sold to, or guaranteed by, Fannie Mae and Freddie Mac. FHFA has produced a video of highlights for this quarter.

On average, regulations imposed by all levels of government account for 24.3 percent of the sales price of a new single-family home, according to a 2016 study by the National Association of Home Builders (NAHB).
Breaking down the total regulatory costs further, the study revealed that three fifths of compliance costs, or 14.6 percent of the final house price, is due to a higher price for a finished lot resulting from regulations imposed during the lot’s development. The other two fifths, or 9.7 percent of the house price, is the result of costs incurred by the builder when building the home after purchasing the finished lot.
In the Greater Greenville area, the study indicates that a new home is $67,424 more expensive as a result of the cost of complying with regulations.

These regulations come from many sources.  They include new land-use controls that reduce the potential density yield of a parcel of land, which increases the cost of the finished lot.  Other regulations include significant changes to the building code that has added thousands of dollars to the price of a new home.  Labor-law changes also have had an impact.  As well as significant increases in building permit fees, development compliance fees, and new sewer account fees.  But the greatest increase in the cost of compliance has come in the form of new and increased environmental regulations to control erosion and stormwater runoff during development and construction.
When the 2016 study is compared to a previous study prepared in 2011, NAHB found that the cost of compliance with regulations increased by 29.8 percent in the five years between the two studies.  That means the cost of constructing a new home in the Greater Greenville area increased by more than $20,000, in just five years, to comply with new rules imposed by government.  Meanwhile, personal disposable income in the U.S. increased by just 14.4 percent during that same time period, meaning that the average cost of regulation embodied in a new home is rising more than twice as fast as the average American’s ability to pay for it.
According to another study by the National Association of Home Builders, 521 families in the Greater Greenville are priced out of Homeownership by a $1,000 increase in the cost of purchasing a new home.  If you do the math, and I have, that means the increase in the last five years in the cost of compliance with regulations has priced out of homeownership more than 10,000 families in our community.
There has been considerable discussion and debate about affordable housing in our community.  Studies by the City of Greenville and Greenville County are providing evidence of the problem.  Many want to blame home builders and land developers for the problem.  But a reading of the studies by the National Association of Home Builders demonstrates that at least part of the problem lies with well-meaning regulations that fail to take into account the impact on a family’s ability to afford a home.
Clearly, a portion of the solution to our community’s housing affordability problem lies in a thorough review of the cost of complying with our own regulations. 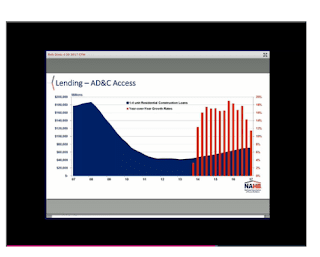 Clear skies, chance of headwinds.
Three experts offer their insights on the direction the housing industry will take through the end of the year is now available for viewing.

Plus a look at what to expect in 2018 and 2019 in the exclusive NAHB Construction Forecast Webinar,

The forecast also includes a discussion of current economic matters, the state of housing demand and an update on supply-side constraints as home builders begin to feel the effects of soaring lumber prices.