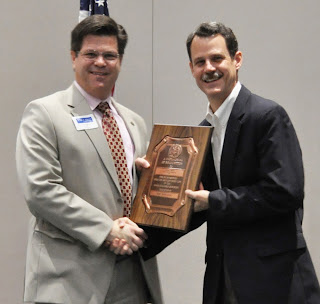 Wayne Moore Is 2012 HBA of Greenville Builder of the Year

–>Each year, the Home Builders Association of Greenville recognizes excellence in craftsmanship, service to the industry, commitment to the community, and member recruitment and retention, with a variety of awards.

The highest honor bestowed annually is the HBA of Greenville Builder of the Year Award. Sponsored by BB&T bank, the HBA Builder of the Year award recognizes an HBA member who has made a commitment of time and talent through committee and program participation that helps strengthen the association for all its members. This builder represents the highest level of integrity and honesty in the home building industry. The 2012 Builder of the Year Award was presented to Wayne Moore, president of Harold Moore Builder Inc. at the association’s Housing Market Forecast meeting in January. A second-generation builder, Wayne is a longtime member of HBA of Greenville and has served as the association’s president twice. We congratulate Wayne on this outstanding honor.

HBA of Greenville brought back the Remodeler of the Year Award in 2012 to recognize the important role remodeling plays in our industry and to honor a member remodeler who has served tirelessly as our membership chairman. The 2012 HBA Remodeler of the Year is Mike Freeman of ACA/Freewood Contracting. Mike presently serves as HBA Vice President and will serve as President in 2014.

HBA of Greenville also recognizes an Associate Member who has made a significant contribution to the local home building industry during the year through volunteerism, member recruitment, and sponsorships. To honor a longtime associate member of the HBA, we named the award the Richard A. Ashmore Associate Member of the Year Award. Richard Ashmore was president of Ashmore Brothers Contracting and was an active supporter of the Home Builders Association of Greenville for many years. The 2012 award was presented to Jon Statom of Palmetto Exterminators. Jon has served for several years on the HBA Community Service Committee and this year was elected to the HBA board of directors.

Finally, HBA of Greenville chooses a committee chair that has shown outstanding leadership throughout the year. The 2012 HBA of Greenville Committee Chair of the Year is Associates Committee Chairman Scott Presley of Greer State Bank. Scott’s committee is tasked with planning member programs and events. Scott has served our association for many years on various committees, as Associate Vice President and as a member of our board of directors.

Congratulations to all of the award winners and thank you for their time, talent and support of the HBA of Greenville.

On behalf of the members and staff at the HBA of Greenville we would like to express our sincerest condolences to active Builder member and past President, Wayne Moore on the death of his mother Mary Ruth Whitmire Moore. Mary Moore, 85, widow of Harold Loyd Moore, of Greenville, died November 17, 2012, at her residence in the presence of her family and friends.

Born in Bostic, NC on September 21, 1927, she was a daughter of the late Harold Dean and Mary Jewel Freeman Whitmire. Mrs. Moore was a graduate of Welcome High School, Class of 1944. She completed two years of training at Draughons Business College. She was employed by W.A. Chandler, Realtor and Insurance, and later by Hughen and Douglas Company. She was co-founder/owner, Vice-President and Secretary of Harold Moore Builder, Inc. since 1971.

As an active lifetime member of Welcome Baptist Church, Mrs. Moore served in multiple teaching positions in the Sunday School and Women’s Missionary Union departments of the church, where she spent countless hours reading, studying, and preparing for upcoming lessons. Mrs. Moore also served as the church historian and enjoyed being a member of the Greenville Christian Women’s Club.

In addition to her parents and husband, Mrs. Moore was preceded in death by a sister, Margaret Doris Nichols, and an infant brother.

Visitation will be held Monday, November 19, 2012, from 6:00 p.m. until 7:30 p.m.at Thomas McAfee Funeral Home, Northwest. The Funeral Service will be held at noon on Tuesday, November 20, 2012, at the funeral home. Burial to follow the service in Woodlawn Memorial Park. The Nina Burns Loving Sunday School Class will serve as honorary pallbearers.