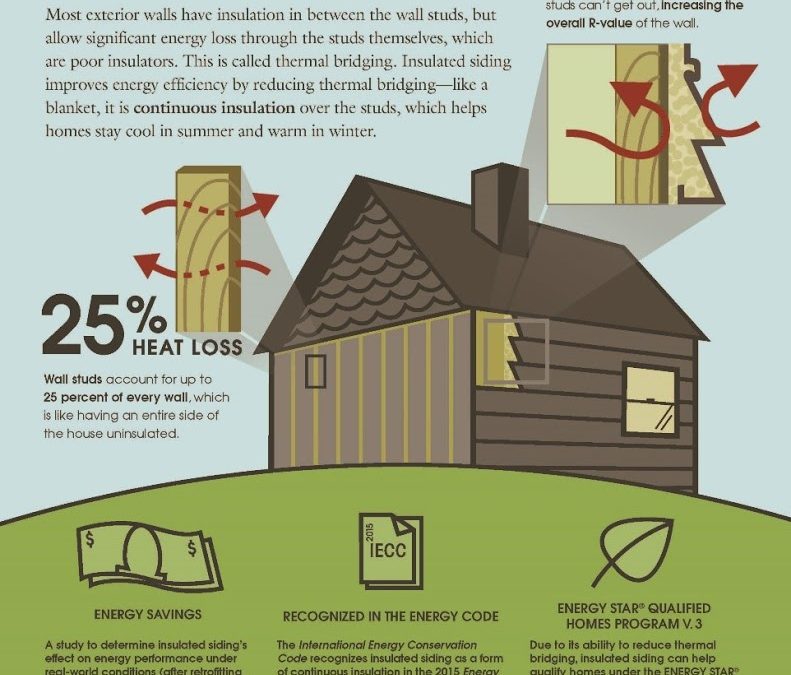 Most exterior walls have insulation in between the wall studs, but allow significant energy loss through the studs themselves. Wall studs, both wood and metal, are poor insulators — when they come in contact with the exterior cladding, they allow heat to pass through them (which is called a thermal bridge).

Insulated siding is vinyl siding with rigid foam insulation laminated or permanently attached to the panel. It fights thermal bridging by blanketing a home’s exterior to reduce energy loss through the studs. The green solution creates a thermal mass and increases the overall R-value of the wall. In energy codes and energy efficiency programs, such as LEED v4, insulated siding is recognized as a form of continuous insulation.

To find the best energy saving cladding for your home, look for VSI’s certification logo on cartons of certified insulated siding, product literature and websites. VSI’s Official List of Certified Products and Colors includes a full list of products and colors certified under the program. For more information about certified insulated vinyl siding, visit www.vinylsiding.org. 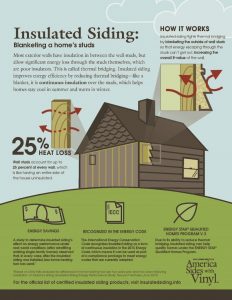 New energy-efficiency requirements as part of the Energy Independence and Security Act of 2007 go into effect this summer for new single- and multifamily homes insured through or with financing provided by some federal housing programs.

All homes using the programs must meet the requirements of either the 2009 International Energy Conservation Code or ASHRAE 90.1 Standard for energy efficiency.

Because the requirements are keyed to updates in the model building codes, the departments of Housing and Urban Development and Agriculture – the two agencies that administer the affected programs – estimate that the new standards will affect about 3,200 multifamily and 15,000 single-family units per year.

That is because the new rules only affect homes built in jurisdictions that have not yet adopted the 2009 International Energy Conservation Code for single-family or low-rise multifamily (three stories or less) or the 2007 ASHRAE 90.1 standard for mid- and high-rise multifamily construction.

South Carolina has adopted the 2009 IECC.

The Department of Energy says that only 12 states have building codes not meeting the requirements, although some jurisdictions within those states may already exceed them.

HUD and USDA also will accept certain programs and properties as being in compliance if they meet equivalent or higher energy-efficiency standards. This includes homes built under the Public Housing Capital Fund, Section 811 Supportive Housing, Choice Neighborhoods and any unit built to Energy Star, Enterprise Green Communities, LEED or the performance path of the ICC-700 National Green Building Standard.

The agencies issued a Notice of Final Determination earlier this month establishing the standards as well as a timeline for when they are effective.

The notice included a nod to the National Association of Home Builders’s comments written last year when the preliminary determination was unveiled: NAHB asked for more time to allow builders and developers to make changes to their plans, and the final notice allows four months after the May 6 effective date for developers to file for FHA insurance under the existing program and grandfathers in seven months for single-family builders that already have obtained building permits.

It also acknowledges NAHB’s request to ensure cost effectiveness in any new requirements, estimating that the changes result in a payback of 5.2 years for low-rise residential, well within NAHB policy of 10 years.

Home builders and remodelers who install large capacity water heaters (greater than 55 gallons) need to be aware that revised federal energy standards that go into effect in April 2015 are expected to have a significant impact on space requirements for these water heaters and on the way they are installed.

Smaller water heaters must also comply with the increased energy-efficiency requirements and are expected to be more costly as a result. However, they are not expected to have additional space and/or venting requirements like the larger capacity units.

The revised standard was imposed by the Department of Energy and will go into effect following a five-year transition period to allow manufacturers to gear up for production of the more efficient units. As of April 2015, manufacturers will no longer be allowed to construct water heaters not meeting the new requirements, but builders and remodelers will still be able to install the existing stock.

Water heaters that comply with the new energy-efficiency standard are expected to be more costly and bulkier than current models. In particular, some current models of large capacity electric water heaters may no longer be available because the higher energy factor standards will require heat pump water heater technology. This new technology requires the water heater to be installed in an area with sufficient household air volume for heat exchange.

In preparation for the new energy-efficiency standard, builders and remodelers who routinely install large capacity water heaters are encouraged to reach out to manufacturers for details about availability and space and venting requirements. NAHB will continue to follow this issue and will provide members with information about installation and potential alternatives to the larger capacity units as it becomes available.

To read more about changes to efficiency standards for water heaters, click here.

SEER Standard for Residential HVAC Standards Will Change in 2015

The U.S. Department of Energy’s (DOE) minimum efficiency standards for residential HVAC systems will change in January.  The change specifically affects Southern states, including South Carolina.  For Southern states, the new standard applies to all systems while in Northern states a split system will still be allowed at 13 SEER.

Effective January 1, 2015, manufacturers will only manufacture 14 SEER or higher for use in Southern states.  Existing inventory of 13 SEER systems may still be installed as long as they are available on the market.

According to an analysis of 13 SEER and 14 SEER systems currently available on the market, the new standard will add about $200 to $300, depending on the size of the system, to the cost of a new HVAC system, plus installation costs.  However, cost for the higher-efficiency systems should ease over time.

To read more about the minimum efficiency standards at energy.gov, click here.

How big a role can building codes play in reducing energy waste?

That is the question economists at the University of Oregon and Yale University sought to answer by comparing monthly utility bills of 2,200 Gainesville, FL, homes built three years before and three years after Florida strengthened it building code in 2002.

According to the study, homes built after the change consumed, on average, 4 percent less electricity and 6 percent less natural gas—savings that homeowners achieved in a variety of ways, including using less-leaky air ducts, more-heat-resistant windows, better insulated attics and certain white roofing products.

The report estimated that the cost of compliance with the new code was less than $1,000 per house, with an average recoupment time for home owners of about 7 years.