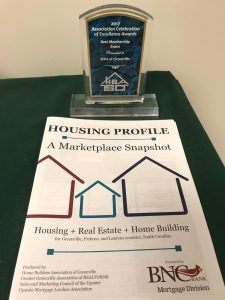 Honored was the association’s Upstate Housing Market Forecast Conference, held annually in partnership with the Greater Greenville Association of Realtors and the Upstate Mortgage Bankers Association.  The award was presented at the Celebration of Excellence luncheon in Greenville earlier this month.

ACE Awards recognize the outstanding accomplishments of South Carolina’s HBAs in the
areas of Communications, Non-Dues Revenue, Membership Program/Event, Education, and
Workforce Development. These Awards represent the good works and added value that the local
associations provide to its membership and community.

OBIE Awards Judges Needed! Greater Atlanta Home Builders Association and the Atlanta SMC are putting on our annual awards program – The OBIE Awards, which recognizes outstanding industry professionals and offers HBA members the opportunity to compete with their peers in a variety of categories. We are seeking judges from around the country to score the various entries and help determine the winners. Interested judges please email Emily to complete the application by 5.26.17.

The Sales & Marketing Council of the BIA of Central SC is looking for judges to assist us in identifying their 2016 REGAL (Real Estate’s Greatest Achievers & Leaders) Winners! Judging will take place strictly online again this year and will be held January 24 – January 29. Online judging is easy because you have 6 days to complete the process and will allow you to work at your own pace from your own computer.

There will be a few video conferencing calls for Individual Award Winners but those will be scheduled accordingly – every judge will NOT participate in every online conference call.
Categories that you would be Judging include: Best Website, Best Mobile Website, Best Special Promotion, Best Use of Social Media, and more.

Deadline to sign-up as a judge will be January 18. Judging opportunities are limited. Should you have any interest or know someone who may be interested, please let me know as soon as possible and I will send you additional info about the process and an online password link.

Your support and expertise would be greatly appreciated! Please contact Heather McDonald at the BIA of Central SC at (803) 256-6238 or heather@columbiabuilders.com if you are interested in participating.

Your Home Builders Association asks that you recommend a member for our annual Builder of the Year Award, Richard A. Ashmore, Sr., Associate of the Year Award, and Remodeler of the Year Award. The awards are given to a member who freely gives of his or her time, efforts and participation in order to make the HBA of Greenville a stronger organization for all of its members. These members serve the industry through participation on HBA Committees and with special projects of the Home Builders Association. Each represents the highest level of integrity and honesty in the home building industry. You can find a full list of winners on our website, but below is a list of recent recipients:

Richard A. Ashmore, Sr., Associate of the Year:
Remodeler of the Year:
In addition, these awards also may be given to members of the association:

Award winners will be announced at the Fourth Annual Southern Home and Garden Bridge Awards, presented by GBS Building Supply, on March 30, 2017.  If you know of a member or other person who should receive one of these awards, please send your nomination to Abbey West at awest@hbaofgreenville.com. Your nomination will be confidential.

The Home Builders Association of Greater Atlanta is seeking judges for their OBIE Awards. Judging will take place from July 20th-24th, with lodging and food paid for.

Judges will be assigned to a variety of the above categories based on their expertise. While in Atlanta, the HBA will provide judges with lodging for the nights indicated, transportation to and from the airport and for all planned activities, lunch and refreshments during judging and a dinner with our Sales and Marketing Council Board on Friday evening. You will be responsible for your transportation to and from Atlanta.

Apply through the form below by Friday, June 10th.