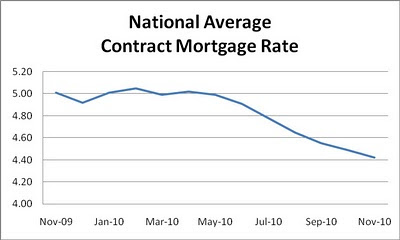 The Federal Housing Finance Agency today reported that the National Average Contract Mortgage Rate for the Purchase of Previously Occupied Homes by Combined Lenders, used as an index in some ARM contracts, was 4.42 percent based on
loans closed in November. This is a decrease of 0.07 percent from the previous month.

The recent rate history can be viewed by clicking here.

The average interest rate on conventional, 30-year fixed-rate mortgage loans of $417,000 or less decreased 12 basis points to 4.38 percent in November. These rates are calculated from the FHFA’s Monthly Interest Rate Survey (MIRS) of purchase-money mortgages. These results reflect loans closed during the Nov. 23-30 period. Typically, the interest rate is determined 30 to 45 days before the loan is closed. Thus, the reported rates depict market conditions prevailing in mid- to late-October.

View the press release from FHFA by clicking here.