The single-family housing market rebound continues, largely thanks to lower mortgage interest rates. The average 30-year fixed rate is currently 3.7% — whereas, just one year ago those rates were hovering around 4.8%. Although a 110-basis-point decline may seem small compared to rate changes of years past, home buyers have become significantly more sensitive to rates since the Great Recession.

Because of the lower cost of home buying, most housing metrics have improved in recent months. The NAHB/Wells Fargo Housing Market Index, which measures builder confidence in the single-family market, climbed from a level of 60 a year ago to 70 this month. In October, single-family construction starts expanded by 2% to a 936,000 seasonally adjusted annual rate. Despite the slow start for 2019, single-family starts are down only 1% on a year-to-date basis and approaching flat conditions for 2019 as a whole. Permits for single-family homes have been expanding since April, and the pace of starts has been improving since May.

Though the NAHB Home Building Geography Index has reported relative strength in exurban and even some rural markets, custom home building in the third quarter was 6% higher than a year ago. The improvement for the single-family sector extends to the resale market as well. Existing home sales increased slightly in October and were up 5.4% from a year ago. Existing inventory declined to a 3.8-month supply, which caused resale price gains to accelerate.

While single-family conditions have improved over the last year, multifamily construction has been relatively flat. The NAHB Multifamily Production Index declined 7 points to a level of 49, slightly below the break-even threshold of 50. Multifamily starts have cooled since August and are currently registering just a slight gain for 2019 on a year-to-date basis. Quarterly data indicate that more than nine out of 10 apartments are built-for-rent, compared to the historical norm of eight out of 10.

The economy has slowed, as evidenced by a 1.9% estimated GDP growth rate in the third quarter of 2019. Yet, housing continues to rebound thanks largely to lower mortgage interest rates, resulting in gains for single-family permits and starts since last spring. The home building component of GDP, residential fixed investment, made a positive contribution to the headline third quarter GDP number after six prior quarters of declines. Home building contributed 0.18 basis points to the headline 1.9% growth rate.

However, the slowing economy and anchored inflation data led the Federal Reserve to lower its federal funds target to a top interest rate of 1.75%. This marks the third cut of 25 basis points in 2019, after four rate hikes in 2018. In retrospect, the 2018 tightening of monetary policy was a policy mistake given tame inflation data and rising macroeconomic headwinds. That said, the revised, current dovish stance of the Fed — particularly its effect of lowering mortgage interest rates — has been a positive factor for housing since the spring.

The rebound for housing in 2019 is clear in recent home building data. The NAHB/Wells Fargo Housing Market Index (HMI) increased to a level of 71 in October, a 20-month high. Single-family starts increased to a 918,000 annual pace in September, marking four months of gains. While new home sales were relatively flat in September, sales are running 7.2% higher in 2019 on a year-to-date basis compared to 2018 transaction volume. And new inventory is down to a 5.5-month supply, suggesting additional construction gains ahead. 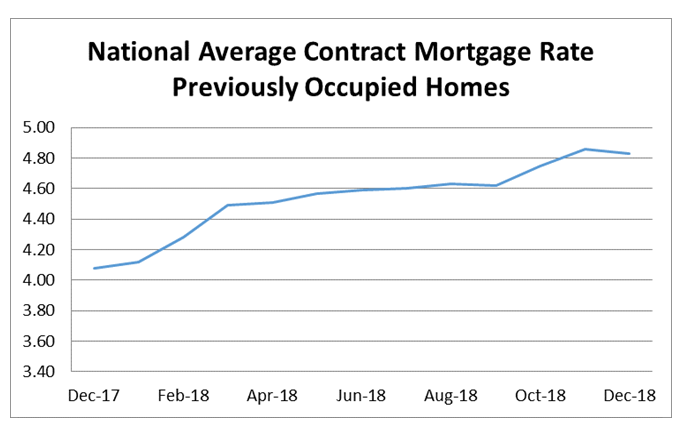 Nationally, interest rates on conventional purchase-money mortgages were nearly flat from November to December, according to several indices of new mortgage contracts.

The National Average Contract Mortgage Rate for the Purchase of Previously Occupied Homes by Combined Lenders Index was 4.83 percent for loans closed in late December, down 3 basis points from 4.86 percent in November.

The average interest rate on all mortgage loans was 4.82 percent, unchanged from November.

The average loan amount for all loans was $318,600 in December, unchanged from November.

The FHFA monthly HPI is calculated using home sales price information from mortgages sold to, or guaranteed by, Fannie Mae and Freddie Mac. From November 2017 to November 2018, house prices were up 5.8 percent. 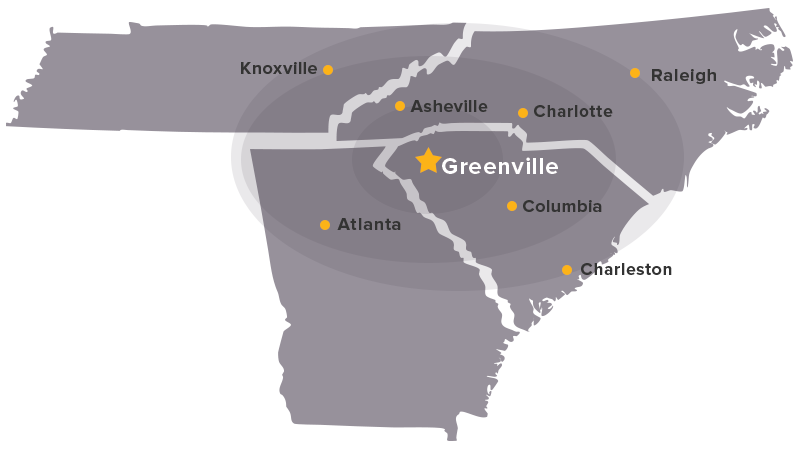 Did you know? Greenville is at the center of more than 10% of the housing production in the U.S.

Within 150 miles of Greenville:

Have a look at this list of cities in the area and the housing production in each market:

A modest increase in interest rates and home prices kept housing affordability at a 10-year low in the third quarter of 2018, according to the NAHB/Wells Fargo Housing Opportunity Index (HOI) released last month.

In all, 56.4% of new and existing homes sold between the beginning of July and end of September were affordable to families earning the U.S. median income of $71,900. This is down from the 57.1% of homes sold in the second quarter that were affordable to median-income earners and the lowest reading since mid-2008.

“Ongoing job and economic growth provide a solid backdrop for housing demand amid recent declines in affordability,” said NAHB Chief Economist Robert Dietz. “However, housing affordability will need to stabilize to keep forward momentum from diminishing as we move into the new year.”

The index for Greater Greenville rose to 71.7 in the third quarter from 69.3 in the second quarter, but fell from 74.7 in the same quarter last year.  House prices fell slightly while income remained the same.  Greater Greenville ranks as the 96th most affordable housing market in the country.

The Rest of the Nation

For the second straight quarter, Syracuse, N.Y., remained as the nation’s most affordable major housing market. There, 88.2% of all new and existing homes sold in the third quarter were affordable to families earning the area’s median income of $74,100. Meanwhile, Kokomo, Ind. was rated the nation’s most affordable smaller market, with 93.2% of homes sold in the third quarter being affordable to families earning the median income of $64,100.

San Francisco, for the fourth straight quarter, was the nation’s least affordable major market. There, just 6.4% of the homes sold in the third quarter of 2018 were affordable to families earning the area’s median income of $116,400.

Other major metros at the bottom of the affordability chart were located in California. In descending order, they included Los Angeles,-Long Beach-Glendale; Anaheim-Santa Ana-Irvine; San Jose-Sunnyvale-Santa Clara; and San Diego-Carlsbad.

All five least affordable small housing markets were also in the Golden State. At the very bottom of the affordability chart was Santa Cruz-Watsonville, where 6.5% of all new and existing homes sold were affordable to families earning the area’s median income of $81,400.